QMN Manufacturing manufactures a wide range of hydraulic cylinders on a number of Mazak CNC machines. QMN approached John Hart to talk about how robots could be utilised to improve their manufacturing operations. With a shortage of local labour and the objective of reducing their manufacture costs, John Hart worked with QMN to identify which operations in their factory could be automated. 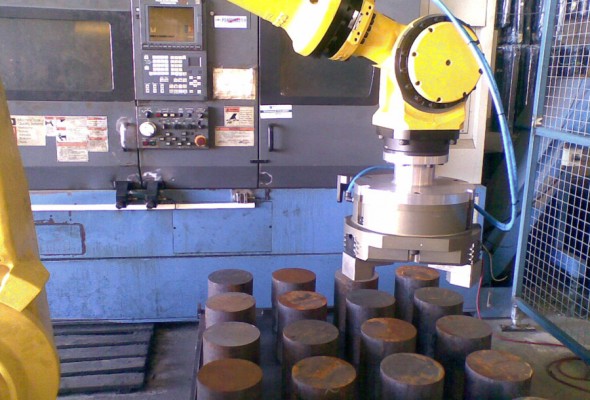 Their first project involved a FANUC R2000iA/165F which automatically loads blank clevis parts into a Mazak lathe. This use of the robot removed any OH&S issues, achieved consistent up time and was able to work longer hours than previously achieved.

After this initial success QMN looked to their welding operations where they were able to implement a Fanuc Arc mate 100i to weld cylinders to end caps. Again this installation proved successful with an increase in process productivity and improved part quality.

Their third project utilised a FANUC R2000iA/165F robot to load a Mazak machine with lengths of tube which are machined into cylinders. Prior to machining the robot measured the tube length and honed the bore. Again this cell proved very successful by increasing process reliability and part quality.

QMN’s fourth project utilises a Fanuc R2000iB/165F robot to handle polished bar which is loaded into a Mazak Quick Turn Nexus 250-II machine. The part is measured prior to loading and as polished bar is being used the robot gripper was fitted with special soft jaws to prevent damage during handling.

All four projects at QMN have been designed and installed by John Hart and have produced significant improvements in product quality and process productivity.

As we all now compete on the world stage, companies like QMN lead the way by embracing the latest technology to help them achieve greater success.